This website compiles my past online presence from my inactive blogs to many of my Instagram and LinkedIn contents. From December 2016, I add new posts here (in category “hasansaidin.comBlog”) and I continue importing from elsewhere, including from my professional website/blog, rubah.my (in category “RubahWebsite/Blog”). 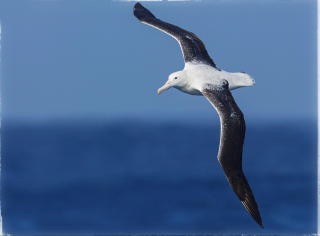 Why the albatross? I have been mesmerized by the bird since the 1970's when I first heard the song, "Albatross" by Fleetwood Mac. I looked for and finally in 2014 I saw my albatross in all its splendour in New Zealand.

Click/tap the song title below to play the song. 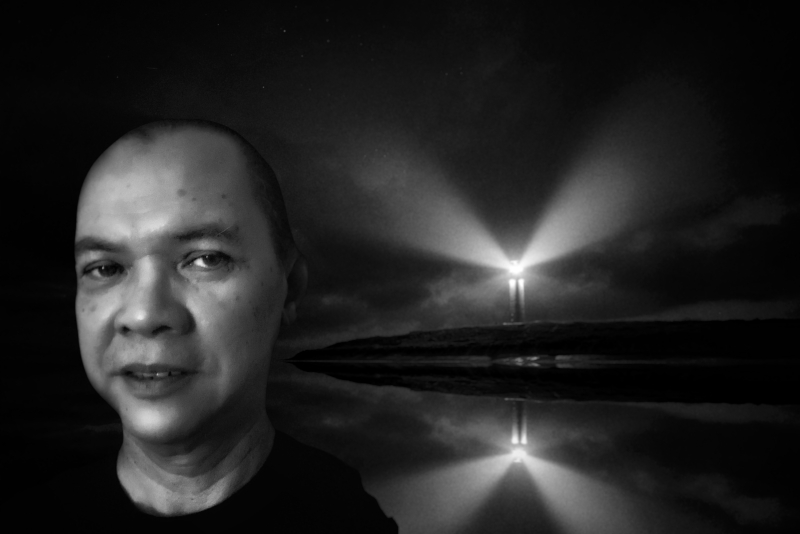 In 2015 I decided NOT to retire, but to rewire. After more than 32 years of working in corporate, it was time for me to pay it forward, on my own terms.

I will eventually pay forward to millions of people. For now I make a positive difference to the world around me, person by person, group by group, team by team, organization by organization, nation by nation.

I created my company, Rubah Associates with the tagline of Horizoning our future, like the albatross over the horizon, bringing out the best of people and myself, in finding new horizons. My “rewire” now has me focusing on being a CEO Coach.

You can find ways to contact me or connect online with me at my Linktree page. 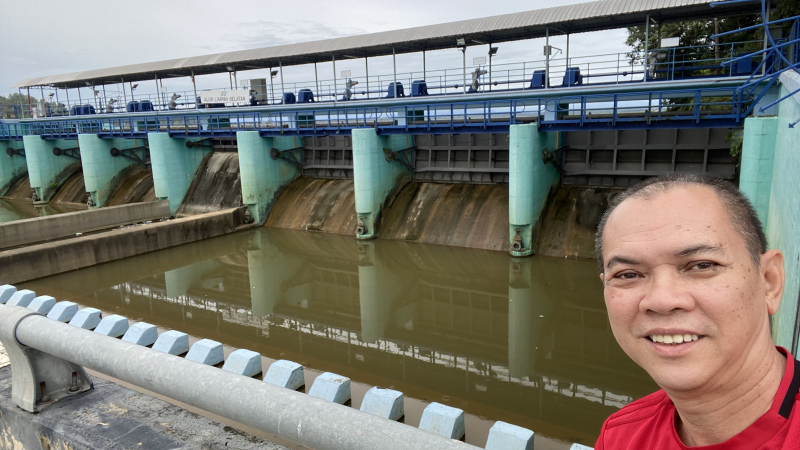 I remember Dad, always. I remember him more so this month, because I just paid a visit to the place we once lived in, Bukit Merah, Perak, some 60 years after.

Bukit Merah lake is a sight to behold, and Dad was in charge of it then.

A must stop for me was the water gate near our home. The 7 water gates are still standing mighty (photo above). I had missed the roaring white water when the gates were open. Alas, during this visit they were closed.

The short main street of Bukit Merah town (if you can call it a town) was eerily quiet, with the shops shuttered. It was Sunday. I sensed that the barber shop which Dad took me to every month was on the left towards the train station, but there is no sign of it now.

There is no more the train station! The train was how we used to reach Bukit Merah when there were no roads yet. The train station area is now overgrown with grass, newly fenced and with a signage that says it belongs to KTM (Keretapi Tanah Melayu, or Malayan Railways).

The wooden police station in front of the train station is still there, now empty, with the paintwork of white and blue intact. When TV first came in the 1960’s, this police station and my home were the only 2 places in Bukit Merah that had TV. Dad kept our window open, to let villagers watch our TV.

I could still point to the start of the shortcut to town, a jungle path which Dad took when he cycled, bringing me along for the monthly barber trip.

Dad cycled all his life. At 70 when he survived an open heart surgery for quadruple bypass, the doctors attributed the success to his strong heart from all the cycling. He lived on till 78.

I cycled to school. When I studied in Australia, I cycled. When I dropped out from Australia, I bummed around on a bicycle.

This included riding from my sister’s house in Kuala Lumpur to Langkawi Island, some 400km away. Enroute rest stops included my cousin’s home in Telok Anson (now Teluk Intan), Perak, our home in Bagan Serai, Perak (Dad had retired by then) and the home of the then 10-year old Faizal Sohaimi in Jitra, Kedah. Faizal is another cousin.

When I studied again in ITM (Mara Institute of Technology) in Shah Alam, Selangor, I was the only one cycling the hilly campus while others had motorcycles or compact cars.

Pre-pandemic, I became finishers at organised fun rides such as the one on the Penang Second Bridge and the 86-km fun ride in Terengganu. Now I mainly cycle on the indoor smart trainer, using Zwyft app and all for the virtual routes.

I once declared (https://www.linkedin.com/posts/hasansaidin_motivation-purpose-coach-activity-6707116911634866177--qrS) that I cycle because it helps me keep fit so that I live to see my first 2 grandchildren graduate from university (or its equivalent 20 years from now).

During this visit to Bukit Merah, I saw the house we once lived in. The huge and ancient mango tree is no longer there. The house area is now fenced and gated, so I did not want to trespass. A man in his 40’s came on a motorcycle and opened the gate for him to enter. I told him I once lived there.

He said his name is Wan. The person in charge living there now is Hasnan. I told Wan my name and that Dad’s name was Saidin. Wan said he knows that name as once being in charge. Dad must be a legend there.

He said he is a local and is grateful that he has a job with the department, and he’s come to check the water level of the lake. Man, how romantic is that? After all these years, a worker like Dad’s still manually records the water level. No IoT (Internet of Things) sensors required.

Measuring and recording was also the hallmark of Dad. While these days there is the movement of the hi tech “quantified self” and “lifelogging,” Dad was the original (lo tech) quantified self. He logged all his expenses. He labeled the date of purchase on items such as batteries.

After electricity was supplied (before that we had power from a generator set that lit our home and the workers’ quarters in the night time only), he recorded the electricity meter readings himself.

I don't do meter readings. My smart watch counts my steps and keeps my health metrics.

Whereas Dad recorded his expenses manually with pencil on paper, I have dabbled with apps like MoneyWiz and YNB (You Need A Budget). I have not been as rigorous and disciplined as Dad, who successfully supported 8 children on his meagre income. My 2022 will include a resolution to go back to expense tracking.

As I ended this visit, I passed the other water gate that is all the time open and supplies irrigation water to the district’s rice fields and water supply to homes and businesses. Like Dad, I would like to believe that I help people and businesses with my version of “water.”

I drove back to Kuala Lumpur, aspiring to be like Dad, God willing.

Create Your Best Year Yet 2022 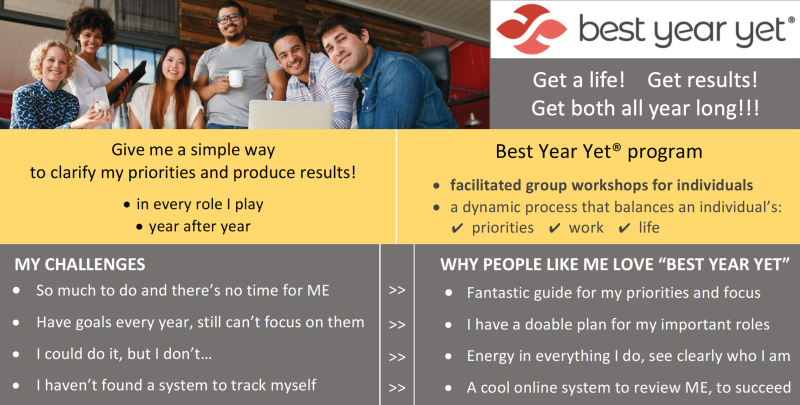 Click here to choose date and purchase ticket.
Make 2022 your best year yet!

The Best Year Yet® program walks through a unique process of introspection, discussion, learning, growth, and integration of the concepts, to develop a 12-month plan that will allow for authentic engagement, innovation, and inspiration.

WHAT THE PROGRAM IS:

- Optional OPTION 1(to enrol separately after the 1-day workshop):follow-through 12 months of half-day group workshops: RM3,000 per half-year, OR RM5,000 for full 12 months, all to be paid ahead

Watch a short video on Best Year Yet®:

The weekly “Peers On Demand” events have successfully been rolled out for the first time in Malaysia on the 4 Wednesdays of October 2021.

Professional peers get together, give ideas, get ideas and connect to collaborate.

Video: Founder Rocky Romero cut the ribbon at the start of the first event on Wednesday, 6th October 2021

"..one child born and a world to carry on, to carry on"
- Laura Nyro
Alhamdulillah… On 22 September 2021, I was a participant showcasing my business at a “Peers On Demand” virtual event hosted by Rocky Romero.

Why do we do what we do? — this video excerpt (5.5 minutes) from that showcasing gave my answer.

Thanks to Naadiah Mazlani, I got introduced to the word “workcation.” Now that I have declared I am on workcation, my mindset is different. I don’t have that nagging question, “Why are you on Zoom working? You’re supposed to be resting!”

I am in Penang these couple of weeks. This workcation finds me working during the scheduled times while being away from my home office in Kuala Lumpur, this week at my son’s apartment and next week hopefully at a beach resort. The vacation part has the main purpose being the welcoming of my new grandchild. Yay, baby girl Hessa Hadi has arrived in this world! The work part are mainly the virtual coaching sessions and virtual events I am conducting. Work gets done while I can enjoy playing with grandchildren and time-lapse videoing clouds and beach sunsets.

Video: Clouds and Penang Second Bridge in the distance, from the balcony of my son’s apartment

Building trust - it’s simple (not necessarily easy): back to the age-old traits of kindness, equity, justice, and charity!

Thank you to Richard CM Wong who introduced me to the book, “The Trusted Advisor” by David H. Maister et al.

Thank you to Andrew Wong who introduced me to the book, “You’re Invited: The Art And Science Of Cultivating Influence” by Jon Levy. 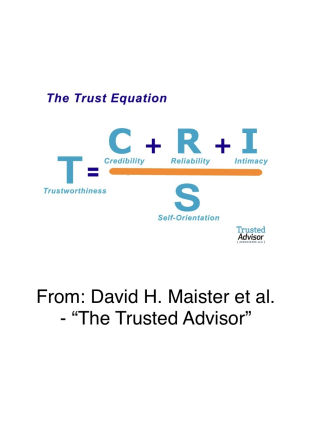 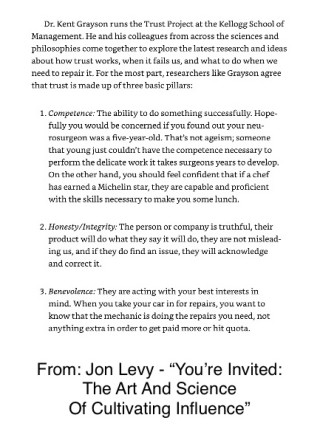