RIM's BlackBerry smartphone users can now access IBM's Lotus Symphony word processing documents, with the eventual capability to use presentations and spreadsheets from Symphony, built on the Open Document Format, as an alternative to Microsoft Office. Lotus Symphony document viewing will be available in the second quarter of this year.

This is significant as many enterprises have had to hold back on ODF deployments due to key infrastructure compatibilities, and Blackberries happen to be one of them. It is wonderful to see the market forces from end users to governments requesting ODF support, and now we are seeing the fruits of this demand; all major vendors will support ODF. 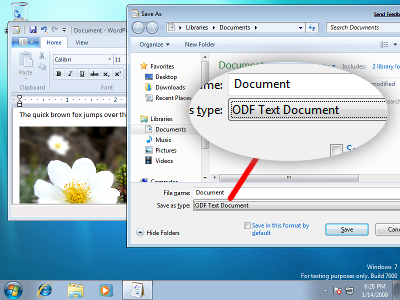 Even Microsoft's Windows Vista 7 have enhanced their built in rich text editor, Wordpad, to natively support ODF (screenshot from Han).

Notably in Wordpad, usage of which is limited. The real test is if they'll support it in the MS Office suite of products, as that's the one with the larger installed and user base.

On this, I hope Microsoft keeps to their word and allows native reading/writing of ODF documents, even if they have to support OpenXML as the default format.

cool man!@ thanks for sharing! blackberries is best phone ever

wow this is a great news.... then, I can write my essay and custom papers using my Blackberry...

This is only a preview. Your comment has not yet been posted.

The letters and numbers you entered did not match the image. Please try again.

As a final step before posting your comment, enter the letters and numbers you see in the image below. This prevents automated programs from posting comments.

Having trouble reading this image? View an alternate.

(Name and email address are required. Email address will not be displayed with the comment.)