I blogged ardently from 2003 to 2010, before the popularity of social media, then left these blogs inactive:

afflatus (...creative impulse, inspiration...) was my personal blog from 2003 to 2008. It had the URL www.afflatusblog.com then. I stopped paying for this domain name eventually.

afflatus (...creative impulse, inspiration...) actually had started on the Blogspot platform before moving to TypePad.

afflatus mobile photo & video blog was my old equivalent of Instagram before Instagram was invented. I was posting photos on the move from 2006 to 2008.

The main afflatus blog afflatus (...creative impulse, inspiration...) was centred on the stories. As a companion blog, afflatus mobile photo & video blog centred around my point-and-shoot-shoot photos and videos, from the then Nokia phones, specifically Nokia 70 at first, then Nokia N73 and lastly the Nokia N82. These were really cool phones then, and photo blogging was super cool!

Nokia even had a Lifeblog application (not called app then) that worked with the TypePad blogging platform I'm on that made it pretty straightforward to photo-blog while being mobile! 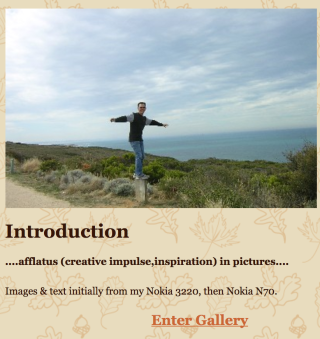 afflatus mobile photoblog was in 2006 my precursor to the afflatus mobile photo & video blog, as Nokia's Lifeblog application was not out yet. So this photo blog was in the form of a gallery or an album. The Nokia phone I used then was the Nokia 3220, then Nokia N70. It was only for a short period, 26 February 2006 to 31 March 2006, with only 16 photos.

The Open Malaysia blog was awesome! It ran 3 years from 2006 to 2009, championing the cause for open source and open standards in information technology.

It, too, had its own indentifiable URL, www.openmalaysiablog.com. This domain name, I eventually stopped paying for, too.

I hosted this as a group blog, so other than me writing, my fellow authors were 8 others: Yong Yoon Kit, Ditesh Kumar, Yusseri Yusoff, Dinesh Nair, Abu Mansur Manaf, Aizat Faiz, Dismas Bismo and Pia Waugh (in Australia). At its height, it had 5,000 views a day, which was a big deal to us. It was certainly the most passionate of my blogs. It included flame wars between us and our detractors!

Big Tree - Class of 1974 was my attempt at my batch of MCKK 1974 schoolmates to blog together, so it was another group blog. Several batchmates joined the fray. However blog authoring was found to be cumbersome for many others. I ran it for 3 months in 2006. It had the domain name www.mckk1974.com and I stopped paying for this, too. It was quite fun while it lasted. After that, another batchmate created another website for us.

I created the InnovationXchange Malaysia website on this blogging platform when I led the company. However, it was just a filler website from 2009 to 2010 before we hired another company to build the more sophisticated website for our company. This filler website and the official one had the www.ixc.com.my domain name, and we stopped paying for the domain when our company wound down.