ODF a National Standard in Korea

If you haven't heard already, ODF is a National Standard in South Korea for a couple of months now. See the news linked below (also transcribed) -- Ditesh, urr... would you be able to translate to English?

[Update 14 Nov 2007: I just appended the English translation after the piece in Korean below. Thanks to YH Woo for the translation.]

The Korean news (thanks to my colleague ,YH Woo):

.
28 August 2007
Microsoft bashed in OOXML shens (and comparing loos)
By Richi Jennings
A digest of blog posts alleging Microsoft improprieties on the ISO ballot for OOXML, including shenanigans in Sweden and Norway.
Computerworld: http://www.computerworld.com/blogs/node/6099

The article still got it confused by saying that this Malaysian public sector adoption of open standards is for eventual migration to the open source platform (see first paragraph of the main article).

Anyway, detractors are howling that the Malaysian Government adoption of ODF is against "technology neutrality."

Not so, say open standards advocates.


23 August 2007
Microsoft kills its ‘Get the Facts’ anti-Linux site
By Mary Jo Foley
"Microsoft has finally acknowledged that its anti-Linux site had gone past the point of usefulness.  On August 23, Microsoft pulled plug on the 'Get the Facts' site, replacing it with a new Windows Server 'Compare' site.  I heard earlier this year that Microsoft intended to kill off the Get the Facts site. But Microsoft told me, at that time, I should get my facts straight, and that there was no intent to do away with the site."
ZDNet: http://blogs.zdnet.com/microsoft/?p=670

With thanks to my colleagues who have been compiling related articles on these, here's a selection of news, articles on ODF, OOXML and the open source scene over the last couple of weeks.

04 June 2007
In Other Words, Open Formats Surging Ahead
By Jonathan Eunice
The march of openness and open standards is progressing rapidly. This is causing Microsoft, the undisputed leader of the foregoing proprietary age and approach, to massively change its strategy and open up its own document format...
Illuminata Perspectives - http://www.illuminata.com/perspectives

02 June 2007
Governing coalition to push for the adoption of open IT standards
Germany's "governing coalition would within the next two weeks submit a motion that would make open formats mandatory."  A legislator said that open formats refer to ODF, which "foster[s] competition between office applications."
Heise online - http://www.heise.de/english/newsticker/news/90547

31 May 2007
The US OOXML discussion is public
By Bob Sutor
In a perfect world, we would know about and could see every committee email and every discussion regarding this and other standards deliberation. To the degree that the proceedings are closed, the standard is less open. ...
Bob Sutor's Open Blog - http://www.sutor.com/newsite/blog-open/?p=1644

30 May 2007
A fight Microsoft can't win?
"If you can't beat 'em, tax 'em. That seems to be Microsoft's thinking in regard to the 'free and open-source software' movement."
Los Angeles Times - (registration required) http://www.latimes.com/technology/la-ed-microsoft30may30,1,4669333.story?ctrack=1&cset=true

30 May 2007
Canada requests OOXML comments
By Bob Sutor
The Standards Council of Canada is requesting comments from Canadians for the SCC's consideration of Microsoft's Office Open XML spec (OOXML) as an ISO standard. If you are eligible, you can leave your remarks from that page but you ...
Bob Sutor's IBM Blog - http://www.sutor.com/newsite/blog-open/?p=1640

29 May 2007
A big surprise in your ISO standard
By Alex Neihaus
In a nutshell, ISO ain't open source. Far from it. The ISO is a super-bureaucracy of bureaucracies. Don't think for a minute that these standards-setting committees are like the open source projects which actually publish source code ...
3D Mojo - http://www.3dmojo.com/cad/a-big-surprise-in-your-iso-standard/2007/05/29/

29 May 2007
Norway Considers Using ODF, PDF Specs for National, Local Use; OOXML Lagging
"A Norwegian national hearing suggested making ODF and PDF compulsory for the Norwegian central government and recommended for use by local governments, but Office Open XML is not now under consideration..."
ICT Standardization - http://www.ictstandardization.com/news/200705/article20070577.html

26 May 2007
ODF en route to ANSI-dom
By Joel West(Joel West)
IBM's Bob Sutor -- who apparently believes in monopoly standards rather than competing standards -- sees efforts to provide choice as anti-consumer:. I believe the industry wants a common set of the fewest possible non-overlapping ...
Open IT Strategies - http://blog.openitstrategies.com/2007/05/odf-en-route-to-ansi-dom.html

Do we need two ISO standards for document format? - Part 5 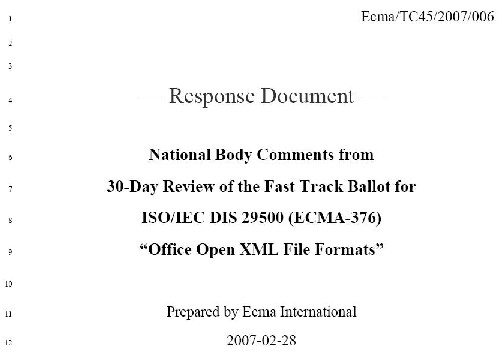 Image above: Cover of Ecma's response to National Bodies' comments (click the above image to view the entire Ecma response document)


Continuing from my Part 4 and Yoon Kit's post highlighting the concerns raised by countries against the Microsoft-Ecma Office OpenXML (OOXML) standard, like Yoon Kit said, "...blog posts will review their [Ecma/Microsft] justifications and their explanations [in the Ecma response document]," so below are links to 2 reviews already:

While Malaysia moves into adoption of the ODF ISO/IEC 26300 International Standard, detractors claim that migration is expensive, and wasteful. On the contrary, there is cost savings!

Watch out, Malaysia, for these kind of words used by the detractors, with respect to adopting the standard:

I've blogged about this before, showing case studies of cost savings realized from deploying office products based on the ODF ISO/IEC 26300 International Standard. I also highlighed the harder to quantify aspects, i.e. Sam Hiser's remarks:

"But what of the productivity gains -- the significant REVERSE COSTS / OPPORTUNITY GAINS -- from pushing desktop data into a format owned by the Commons? What of the budgetary control issuing from ODF's release of the Monopoly's pernicious lock (upgrade decision processes become internal)? What of the smoother, faster document turn-around?

“From the early analysis performed by a wide range of governments, it is very realistic to expect at least a savings of about 60 percent using ODF. And with the growing range of commercial and open source applications supporting ODF, there are more choices than ever for capturing those cost savings."

We refuse to believe the detractors' FUD (fear, uncertainty and doubt) statement of "increased cost" and  the like. The longer we delay, the longer we get to the opportunity of gaining from the savings.

Malaysia should then grab the opportunity right away!

Below is the transcript of the ODF Alliance's migration cost assessments:

While the effort to recognize ODF, the international standard ISO/IEC 26300 as a Malaysian Standard is in progress, there may be concerns that Malaysia is "rushing too fast" as a country into adopting this international standard and that there won't be any support if we were to deploy it locally. This fortunately is not the case, as there has  been a large market share of ODF-implemented products in governmental bodies to date.

If you were to follow this link, you see a list of decisions by government bodies around the world to adopt office software supporting the ISO/IEC 26300 standard. The list is far from comprehensive and is only the tip of a very large iceberg.

The link also says that the Yankee Group in October 2005 put the OpenOffice.org market share among small and medium businesses at 19 per cent, up from the 6 per cent figure reported by Jupiter Research less than two years previously. One might suspect that software supporting the ISO/IEC 26300 today has a larger market share in government offices than among small and medium businesses.

The link describes the following countries/states/regions/cities which have adopted the international standard:

These nations are already enjoying the benefits of sovereignty, cost savings and increased choice in their applications to use.

Is Malaysia rushing? Or are we refusing delay, expediting opportunities? Leader or follower, we are certainly not alone!

The deal between Microsoft and Novell includes work on ODF:

"The two companies will now work together on ways for OpenOffice and Microsoft Office users to best share documents and both will take steps to make translators available to improve interoperability between Open XML and OpenDocument Formats."

Commentary from Groklaw -- Novell Sells Out

No doubt there will be a lot more coverage on this development. Interesting to see what the two companies will really do with this deal.

Watch out for more FUD

Via Bob Sutor's Open Blog, How the anti-open game is being played in Europe, see the Techworld article Leaked letter warns of open source 'threat to eco-system'.
Excerpt:
"A leaked letter to the European Commission has revealed the extent of lobbying by proprietary software groups to prevent the widespread adoption of open-source software."

Watch out - this kind of FUD (fear, uncertainty, doubt) messages may find its way to Malaysia.

I missed posting in this blog the previous ODF Alliance newsletter dated 19 September 2006, but it can be found at this link. The latest newsletter below includes items not recently mentioned in this Open Malaysia blog, e.g.  the ODF Day at aKademy 2006. Read on:

French Government Report Urges Europe-Wide Adoption of ODF
In a report prepared for Prime Minister Dominique de Villepin, French National Assembly Deputy Bernard Carayon called for a law requiring use of ODF by French government departments when they create or distribute documents, and recommends ODF for official document exchange at the European level.

OpenDocument Day at aKademy Features Discussion of Status of ODF in European Public Administrations, ODF Test Suite and Developers Kit
Open Document Day at aKademy 2006, the annual meeting of Alliance member KDE, was held on Sep 26 in Dublin. The KDE desktop environment for Linux includes the ODF-supporting KOffice suite of applications (KWord, KSpread and KPresenter ). Keynote speaker Barbara Held from the European Commission spoke on the process and politics around technology standards in Europe. Prof. Lotzi Bölöni from the University of Central Florida spoke on some Intel-sponsored work his students are doing on an ODF Test Suite. Rob Weir from Alliance member IBM spoke on a proposal for an OpenDocument Developers Kit (ODDK).

Image: Map of the Commonwealth of Massachusetts, USA

In August, I blogged about Massachusetts proceeding with ODF by January 2007, citing Louis Gutierrez, CIO of their ITD (Information Technology Division) releasing the Massachuestts Mid-Year Statement Regarding ODF Implementation.

This week we learnt of CIO Gutierez sending in his resignation letter. How unfortunate. His reason for resignation has to do with issues of Massachusetts budgetting for the ITD initiatives. I await further developments in Massachusetts, but I am at least comforted by the quote from a Massachusetts spokesman, Felix Browne saying that Gutierez's departure will not derail the state's policy of adopting ODF as the state's default document format.

But this week also brings cheer!

Vive le France! OK, so this year they disappointed me by losing in the final of the World Cup. But now I'm happy to learn that a report commissioned by the French Prime Minister has recommended that all government documents should be made available in ODF. France is also to ask other European nations to do the same.